Join us Wednesday, March 7th, for a live and interactive FutureofEducation.com panel and community discussion on Seth Godin’s new education manifesto Stop Stealing Dreams. I will be hosting a panel that includes Patrick Ferenga, Lisa Nielsen, Lisa Cooley, Lisa Nalbone, and Nikhil Goyal, asking them and the audience to share their thoughts around the topics addressed in the book--including K - 12 and higher education reform, home schooling, and what parents, students, and school boards can do to affect change. 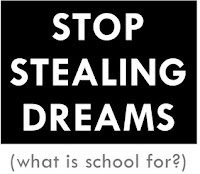 With a growing sense that something has to change, Seth Godin’s manifesto addresses the need to update outdated teaching practice. He explains, “School was invented to create a constant stream of compliant factory workers to the growing businesses of the 1900s. It continues to do an excellent job at achieving this goal, but it's not a goal we need to achieve any longer.” In his 30,000 word manifesto (information on free download and discussion options here), Seth Godin imagines a different set of goals. He warns that one thing is certain: if we keep doing what we've been doing, we're going to keep getting what we've been getting.

Date: Wednesday, March 7th, 2012
Time: 4pm Pacific / 7pm Eastern / 00 (next day) GMT (international times here)
Duration: 1 hour
Location: In Blackboard Collaborate (formerly Elluminate). Log in at http://futureofed.info. The Blackboard Collaborate room will be open up to 30 minutes before the event if you want to come in early. To make sure that your computer is configured for Blackboard Collaborate, please visit the support and configuration page.
Recordings: The full Blackboard Collaborate is at https://sas.elluminate.com/p.jnlp?psid=2012-03-07.1603.M.9E9FE58134BE68C3B413F24B3586CF.vcr&sid=2008350 and an .mp3 recording is at http://audio.edtechlive.com/foe/stopstealingdreams.mp3.

Lisa Cooley - School Board Member
Lisa Cooley has been agitating for changes in public education for eight years. She serves on the school board of Maine’s RSU 3. She is also a Suzuki violin teacher and a glass bead maker and jewelry designer. She has 2 children in public school. She blogs at http://mindsofkids.blogspot.com.


Pat Farenga - Home Education Expert
Patrick Farenga is a writer and education activist who worked closely with the author and teacher John Holt, until Holt’s death in 1985. He is the president of HoltGWS LLC. and was the publisher of Growing Without Schooling magazine (GWS) from 1985 until it stopped publishing in 2001. GWS was the nation’s first periodical about homeschooling, started by Holt in 1977. The Farengas unschooled their daughters, now aged 25, 22, and 19. Unschooling is a word created by Holt to describe how people learn in the world without using conventional school techniques and materials.

Farenga speaks as a homeschooling expert at education conferences around the world, as well as on commercial radio and television talk shows. His media appearances include The Today Show, Good Morning America, Voice of America, Geraldo, Learning Matters, CNN’s Parenting Today, The Dr. Drew Pinsky Show, and Fox and Friends.

In addition to writing for GWS for twenty years, Farenga’s books include Teach Your Own: The John Holt Book of Homeschooling (Perseus) and The Beginner’s Guide to Homeschooling; articles about homeschooling and democratic education (Encounter Magazine, Summer 2011); and essays about unschooling in a number of publications such as Un Mundo Por Aprender (University of Colombia, Bogota, 2011), and the entries about homeschooling for the International Encyclopedia of Education, 3rd Edition (Elsevier, 2010) and the online edition of Encyclopedia Britannica (2012, forthcoming).

Nikhil Goyal - Student, Upcoming Author, Entrepreneur
Nikhil Goyal is a student at Syosset High School in New York. He is currently writing a book on education reform: Time to Think Different: Why America Needs a Learning Revolution. In addition, he writes weekly columns for the Huffington Post and guest blogs for the New York Times: Dot Earth blog. Goyal is empowering students, educators, parents, and administrators with the upcoming Learning Revolution movement to shake up the American education system. Goyal’s email is ngoyal2013@gmail.com.

Lisa Nalbone - Parent to Dale Stephens who is leading the Uncollege Movement
Lisa Nalbone has been a community activist since her long ago graduation from Duke University. Her interest in peace and social justice issues led to her work in education and with libraries. She taught various grades and subjects in public school for almost 15 years, usually stirring the pot by asking “Why can’t we do what’s best for the student?”

She began the homeschool/unschooling journey with her son Dale in 2002, wishing that all students could experience such learning freedom. Oddly enough, she still assumed Dale should enter traditional higher education even though she had such mixed feelings about her own university experience. After much research about WHICH college, she sent Dale off without really asking the bigger question of Why?

This past year she has returned to the education reform conversation at a whole new level. She has connected with many people around the country, who are asking important questions about school reform and change, for both K-12 and higher education. She blogs at www.lisanalbone.com.

Lisa Nielsen - Innovative Educator
Lisa Nielsen writes for and speaks to audiences across the globe about learning innovatively and is frequently covered by local and national media for her views on “Passion (not data) Driven Learning,” "Thinking Outside the Ban" to harness the power of technology for learning, and using the power of social media to provide a voice to educators and students. Ms. Nielsen has worked for more than a decade in various capacities to support learning in real and innovative ways that will prepare students for success. In addition to her award-winning blog, The Innovative Educator, Ms. Nielsen’s writing is featured in places such as Huffington Post, Tech and Learning, ISTE Connects, ASCD Wholechild, MindShift, Leading and Learning, The Unplugged Mom, and is the author the book Teaching Generation Text.
Steve Hargadon at 7:12 AM
Share